This week we dive in with another round 7 recipient, Vasa, founder of Vyper, the fun, interactive way to learn Vyper lang. So fun that you can literally learn Vyper by building a Pokémon game.

Why does Vyper matter to the ecosystem?

It's an alternative programming language for EVM-based applications which has security as its design goal.It practically makes it hard to devs to write un-secure code due to its design choices.

Background: how did you get into web3?

I started programming in 2017 and was exploring different fields like Android/Web dev, ML/AI, etc. While exploring I came across the blockchain. I ignored it at first, but soon after that my friends started investing in Bitcoin and other assets so I got into it too. Soon I realized that this (blockchain) is something groundbreaking so I started diving more. I left my college for a few semesters to start a startup around blockchains and AI. Meanwhile, I also worked on a lot of side-projects (I always have some side-projects) mainly around Protocol Labs projects (IPFS, IPLD, Libp2p, Multiformats, Filecoin, etc).

I came back to college in mid-2019 for a break, still working on a few ideas (Dappkit, Simpleaswater). In mid-2020, I started exploring Defi while working on Dappkit (firebase for web3) to understand what kind of apps people want to build on web3.

I soon got interested in Defi so much so that I kept dappkit on standby and started learning more about the Defi space. I was exploring Curve finance when I realized that there is no resource for Vyper as we have Cryptozombies for solidity. So, I started working on vyper.fun and from there I met Vyper maintainers, doggie (from yearn), Ben (from Curve). This is how I got into the core groups of Defi projects and started working with many of them.

Tell us about your project ...What was the inspiration behind it?

Mainly while I was exploring different Defi projects, I came across Curve which is written in Vyper. So, I was looking for any good resources on Vyper but the only thing that I found was the language documentation. While it was good enough for an experienced developer, it's not an ideal resource for someone who is just starting as a developer. I wanted something fun as Cryptozombies, but for Vyper. So, as I learned more about Vyper from the documentation and the Vyper maintainers, I started building a fun resource so that it's easier for other people to learn Vyper.

Why does Vyper matter so much to the ecosystem?

What I really like about Vyper is that it focuses on security and treats it as a core design goal. Hence, the language has features that support that design goal, which makes it harder for the devs to write insecure code in Vyper. You can find more about Vyper's principles and goals here.

What are the core competitors/alternatives to Vyper?

There are 2 more languages that you could use to write contracts: Solidity and Fe.

What security factors are you most concerned about?

As I have been working in the Defi space for more than 6 months now, there are a lot of hacks that we see today. Most of them are caused due to mistakes that could not be mitigated by using a specific language. The composability of Defi makes it much harder to keep your projects safe, as even if your project is safe from any attacks, other projects that your project uses (or any project that uses your project) can get exploited, which might end up damaging your project too. So, the best we can do is to learn from mistakes that others have made, try to re-use tried and tested code/practices, and follow a "do not trust, verify" approach.

CLR fund is an interesting way to fund your open-source work in a cheap way (as it's on xDai). I have been using Gitcoin for a while and clr.fund provided similar functionalities on xDai.

What key use cases beyond the current ETH ecosystem fundraising do you see Quadratic Funding being super helpful for?

I like how Quadratic voting is a very neat mechanism. It not only captures your opinion about a specific topic but also how strongly you feel about it. If you take an example from Vitalik's "Quadratic Payments: A Primer", where your company is conducting a vote to decide the location of the new office. Let’s suppose there are 2 options for the new location. If we conduct a vote where each voter just votes which location he/she wants to be the location for the new office, then it might miss some important details about how far is the new office location from where you live (which will decide how strongly you feel about an option). Hence, using quadratic voting (and related mechanisms like quadratic funding) might bring out important details in the final verdict that are usually missed using traditional voting mechanisms.

What would you change about the Ethereum world right now?

TBH, I wouldn’t change anything about the ecosystem, even if there are many things that keep me awake at night (I like having some big challenges and I love the journey to overcome those challenges).

In saying that, a few things that keep me awake at night are building capital efficient financial infrastructures, improving UX for users (I’m eagerly waiting for EIP-3074 to go live), and just working on different interesting ideas/public-goods.

TYSM for joining us in conversation, Vasa! 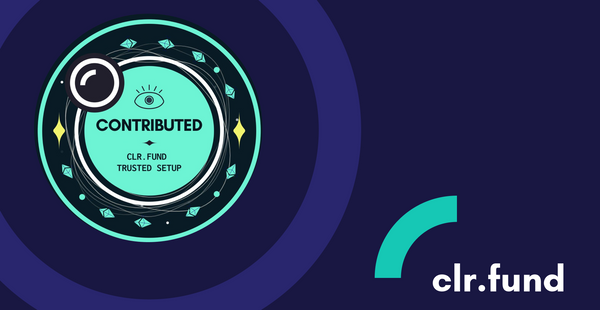 tl;dr: Clr.fund has completed a trusted setup with a record breaking number of participants. Here’s how you can verify your contribution. OverviewWe just concluded our first trusted

This week we dive in with Eyal from DeepDAO, that offers DAO insights into the decentralized world. DeepDAO lists, ranks and analyzes top DAOs across multiple metrics and has Governance + People feeds in the current beta.